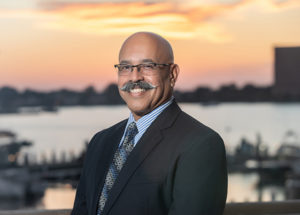 Juan Alonso Sr. is a New England Yankee born and raised in Bridgeport, Connecticut. His last duty station was in Norfolk Naval Station prior to his retirement from the Navy.  He is currently a DOD civilian working as an administrative operations assistant. While in Hampton Roads, he received an Associates Degree in Administrative Management from Tidewater Community College. Juan is a husband to Cindy, father to three, and grandfather to seven.

Juan has been a Hampton Roads Pride member since 2014. Throughout these years of membership, Juan has participated in the Polar Plunge with the Pride Plungers and assisted with the planning, construction and participation of the Hampton Roads Pride St. Patrick’s Day parade float. Juan assumed the lead as the ABC Manager for the Block Party and PrideFest in 2016 and 2017.