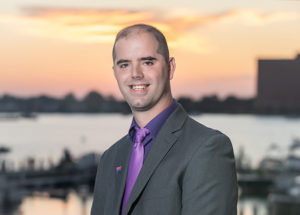 Ryan was born in Providence, Rhode Island and moved to Hampton Roads with his parents in 2001. Ryan is a father of two wonderful kids. Ryan is currently a Store Manager in Training for CVS Pharmacy. Ryan also volunteers with the Girl Scouts, Special Olympics, Operation Smile, and is a member of the CVS Health LGBT Pride group.

Ryan DeCorpo has been an active volunteer and fundraiser for Hampton Roads Pride since 2014. In 2015 and 2016 Ryan was lead volunteer for PrideFest. In 2017, he became the co-chair of the volunteer committee. As a newly elected board member, Ryan is serving as co-chair on the PrideFest Committee.